Why Wait 6 Months Until The Pain Becomes Unbearable?

Shari graduated on the Dean’s List from the University of Western Ontario with an honours degree which included a specialization in Athletic Therapy.  A summer job after graduating from Western turned into the establishment of a Pedorthic practice in 1991. Shari achieved her American Certified Pedorthist [C. Ped] designation in 1992.

In 2001, in response to the ever changing insurance regulations, Shari also achieved her Canadian Certified Pedorthist [C. Ped (C)] designation.

Shari’s first exposure to Pedorthics was during her time at the University of Western Ontario.  While working in the Kennedy- Fowler Athletic Injuries Clinic, Shari was fortunate enough to regularly see Canadian pedorthic pioneer, Howard Feigel, performing pedorthic assessments. Although not knowing at the time what it was that he was specifically doing, little did Shari know Pedorthics would become not only her future career, but a passion!

With over 21 years of Pedorthic experience, Shari whole heartedly believes improving someone else’s life “One Step at a Time”, is very rewarding! 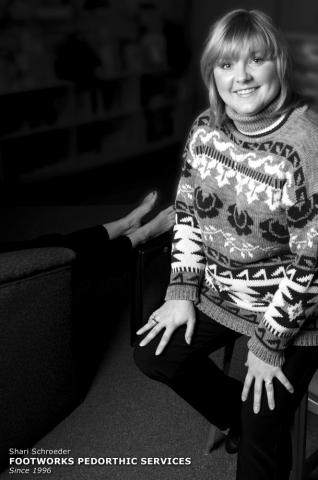